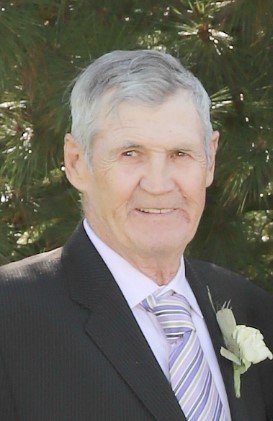 According to God’s great goodness and in His perfect timing, Wayne Higgins was called home, at the age of 81, on Saturday, May 22, 2021 at the North Lambton Lodge. Wayne was born to the late Gordon and Edith Higgins, on November 5, 1939, in Watford, Ontario. He grew up on the home farm, with his sister Arlene (Dennis) Ostrosser and brother Doug (Sandy) Higgins.

In 1967, he met Ginie (Vandervecht) and they were married in Strathroy on Sept.15, 1972. In their 49 years of marriage, Wayne and Ginie were blessed with 3 children; Warren (Beth) Higgins, Heidi (Jason) Thuss and Hilary (Travis) Spicer, 9 grandchildren, Duane (Laura), Aaron, and Brianne Knight, Caleb Higgins, Lydia Jane, Chloe and Alaina Thuss, Dylan and Bailey Spicer, and 6 great-grandchildren.

He will be lovingly remembered by Ginie’s brothers and sisters, as well as many nieces, nephews, cousins, and the friends he has made over the years.

His work life involved various excavating, construction and landscape jobs around Lambton County. He really enjoyed running the different machines and spending time working on his equipment. He loved sharing local stories from the past about the Watford area, especially the Maxmobile, and was a member of the Lambton County Historical Society for several years.  During his daily interactions with people, Wayne enjoyed joking around and was quick to give a friendly smile.

In recent years, Wayne dealt with several illnesses as his body and mind began to fail and he relied a great deal on the patient care and support of Ginie, many PSW’s and other health care workers. There was a steady stream of support from family, friends, neighbours at Trillium Village and members of Providence United Reformed Church who provided rides to cancer treatments or doctor visits, walked with him or regularly took him for a scenic drive. Words cannot express how thankful we are to those people and all who have cared for Wayne or touched his life in some way.

A private family service will be held on Tuesday, June 1st, 2021 at Providence United Reformed Church. As expressions of sympathy, donations to the Alzheimer Society of Canada would be appreciated by the family. Arrangements entrusted to DENNING’S OF WATFORD. Share a memory at www.watfordfuneralhome.com.

Share Your Memory of
Wayne
Upload Your Memory View All Memories
Be the first to upload a memory!
Share A Memory