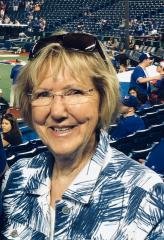 It is with great sadness that we announce the passing of Mary Lou Acton, of Watford on Monday, March 25, 2019 at Bluewater Health Hospital in Sarnia at the age of 85. Beloved wife of the late Kenneth Acton (2016). Loving mother of Susan Acton (Roger Gollop) and Mike Acton (Anita). Nana to Jordan and Josh (Hillary) Acton-Gollop; Erika, Rachel (Taylor) and Megan Acton.

As per Mary Lou’s wishes a private service will be held at DENNING’S OF WATFORD. As an expression of sympathy, donations to the Watford United Church or the St Joseph’s Hospice, Sarnia would be greatly appreciated by the family. Online condolences and donations can be made at www.watfordfuneralhome.com.  Arrangements entrusted to DENNING’S OF WATFORD, (519) 876-2218.

Share Your Memory of
Mary Lou
Upload Your Memory View All Memories
Be the first to upload a memory!
Share A Memory