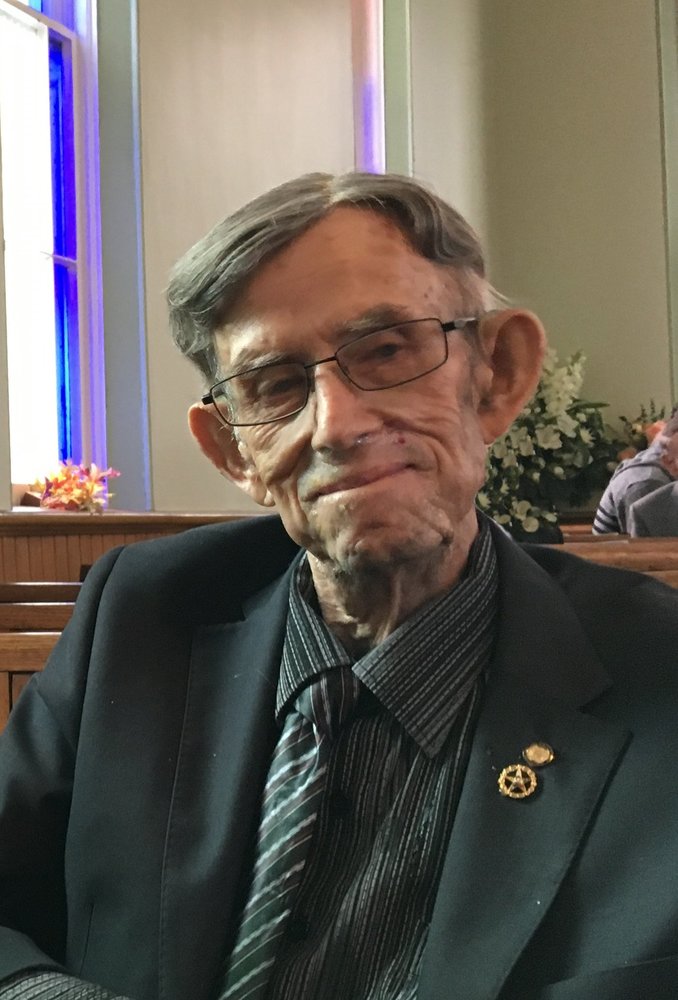 Peacefully at Strathroy Middlesex General Hospital on Tuesday, December 5, 2017, William “Bill” Smith of Napier passed away on his 91st birthday.  Loving husband of Bernice Smith (nee Merrick) for 66 years.  Beloved father of Doug (Debbie) Smith and Marilyn Buttery.  Dear grandfather of Kim (Rob) Vos, Stephanie (Patrick) Sanders and Kurtis (Bridget) Smith.  Survived by great grandchildren Cameron Vos, Eva Vos, Brooklyn Sanders and Jackson Sanders.  Sadly missed by family friend Lynne Lawrence and many extended family members and friends.  Predeceased by his brother Jack, his son Donald Charles and his grandson Kerry Douglas.  Bill was a farmer, a bus driver starting at a one room school in 1949 & then # 1 bus driver for Brooke Central School from 1961 to 1994.  He was a salesperson, an avid picture taker (always had a camera on his belt), card & bingo player & friend to all he met. Bill was a 70 year Masonic member of Ionic Lodge #328, Napier & a 65 year member of Eastern Star, Forest Chapter 116, and a lifetime member and Elder of St. Andrew's Presbyterian Church, Napier.  Good natured & easy to get along with, he enjoyed his family & friends.  Bill lived in the Napier area surrounded by his family.  His second home for many years was at The Klondyke Trailer Park in Grand Bend.  An Eastern Star Service under the auspices of Forest, Chapter 116 will be held on Friday, December 8th at 1:30 pm.  A Masonic Service under the auspices of Ionic Lodge #328, Napier will be held  at 6:30 pm.  Friends will be received on Friday, December 8th from 2-4 and 7-9 pm at DENNING’S OF WATFORD 519-876-2218 where a funeral service will be held on Saturday, December 9th at 2:00 pm with visitation one hour prior.  Reverend Jo-Anne Symington officiating.  Private family interment in Strathroy Cemetery at a later date.  As expressions of sympathy memorial donations may be made to St. Andrew’s Presbyterian Church, Napier, Strathroy Middlesex General Hospital Foundation (Dietary Department) or to a charity of your choice.  Online condolences accepted at www.denning.ca