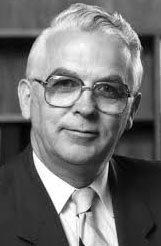 The family of Hon. Ralph Hugh Duncan Ferguson regret to announce his passing on August 30, 2020 at Watford Quality Care.

Beloved husband of Dolores (Garrod). Ralph will be sadly missed by his son Doug, his wife Laurie Lashbrook and their children Sarah McCabe (Jamie), Duncan and Erika; son David, his wife Gabrielle and their son Nichol; daughter Susan McCaw, her husband George and their children Scotty and Jenna; and son John and his children Matthew and Lauren.  Proud great-grandfather to Mary and James McCabe.

Born in Mosa Township in 1929 to parents Annie (MacDonald) (1978) and Hugh Ferguson (1966), he farmed most of his life in Brooke Township; first on Petrolia Line East, and later moved to his maternal grandparents' home on Old Walnut Road.  He was a progressive farmer, building his operation over the years to include cash crops, eggs, pork, and beef.

In early years, Ralph was active in many farm organizations from Junior Farmers and various marketing boards to the Egg Producers.  From 1972 to 1976 he was a charter member of the National Farm Products Marketing Council in Ottawa; and was one of the "founding fathers" of supply management in Canada.

Ralph worked with other farmers to promote clean burning ethanol-blended fuels and, espousing that cause, was elected as the Liberal MP for Lambton-Middlesex in 1980.  He held positions as Deputy Whip, and Parliamentary Secretary to the Ministers of Small Business and Finance.  He became Minister of Agriculture briefly in 1984, losing the election of that year but winning re-election in 1988.  His "Compare the Share" study was a popular manifesto for farmers and consumers, comparing prices at the farm to those at the processing and retail level.

A highlight of Ralph's time in Ottawa was accompanying Prime Minister Pierre Trudeau on a trade mission to several Asian countries in 1983.

Ralph retired in 1993 but continued to take on projects dear to him.  His interest in local history and pride in his Scottish roots resulted in a film, The Early Scot Pioneers of Lambton and West Middlesex, made primarily for use in local schools.  He also led a community cancer survey and delved into the problems of impurities in imported foods.  Over the years he planted hundreds of trees on the family farm.

Ralph was a former elder in Guthrie Presbyterian Church, Alvinston, a former Mason and Rotarian.  He was inducted into the Ontario, Middlesex, and Lambton Agriculture Halls of Fame.

Due to COVID-19, a private burial will take place.  A celebration of Ralph’s life will be arranged at a later date.

Memorial contributions can be made to the Alzheimer Society of Canada, London Health Sciences Foundation - Transplant Unit, or any charity of your choice.

Arrangements entrusted to DENNING'S OF WATFORD (519 876-2218).  Share a memory at www.watfordfuneralhome.com

Share Your Memory of
Ralph
Upload Your Memory View All Memories
Be the first to upload a memory!